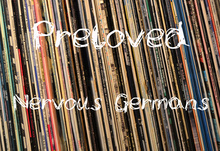 Nervous Germans are back with their own special version of alternative loud guitar rock. As a prelude to their 2014 album VOLATILE, Friday the 13th of December 2013 sees the release of the EP PRELOVED, a collection of 4 cover versions of songs the band simply have fun playing. Songs taken from the past and present that allow the soaring guitar skills and punch in the throat vocals of Nervous Germans free rein.

The energy that leaps from the speakers right from the beginning of Run Boy Run proves that a cover version can develop a life of its own away from the original. Stripped down to acoustic and electric guitars gives the following song, Garbage’s I’m only happy when it rains, an immediacy that the passing of time perhaps obscured.

Armageddon, the closer, doesn’t give you any time to recover from the sheer might of Eloise so just hang on for the 3 minute 58 second ride....then take a deep breath and press play start once more.